The Rise and Fall of the Martial Arts News 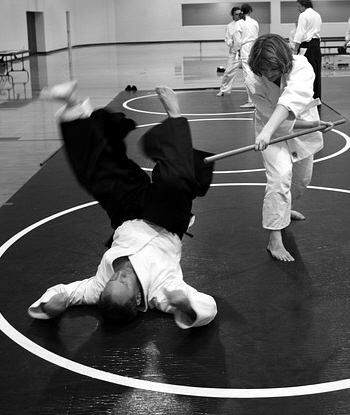 Wanna know the truth about one of the biggest mistakes I've ever made? I'll keep the story short.

I met a very nice guy through a mutual client. He was an avid martial artist who saw a business opportunity ripe for the picking. After learning about my background, he invited me to co-publish a martial arts newspaper. Money to produce it wasn't an issue, he assured me. After all, he was an experienced salesman, had great connections and was willing to do whatever it took to make it work.

We published exactly one issue. The second issue was canceled mid-production because the well ran dry. I had been funding the whole shebang using a credit card, and as the expenses mounted with no end in sight, we folded.

Live and learn, as they say. At least I ended up with some sweet articles for my portfolio. Here's one for your reading pleasure.

A Look at Temecula's Only Aikido Dojo

The students, with the characteristic grace and finesse of Aikido, fell again and again to the floor. The room was quiet except for the thunk! of hands against the mat — a technique used to absorb energy from the fall.

The pace of the practice then quickened as students hurtled into rolls. Expressions conveyed obvious enjoyment of their ability to flow with the forces of gravity. It was a classic demonstration of body and nature working together.

Three to four times a week, the Tumble Jungle gym in Temecula, Calif., transforms into a practice hall for Aikidoists. They're led by Sensei Phil Greenwood, who has a third-degree black belt (sandan), and his wife, Renae.

The dojo opened in October 1991 when the Greenwoods moved their chiropractic office from Pasadena to Temecula. By word of mouth and a single flyer in a health-food store, students arrive at the dojo. Phil charges only a nominal fee to cover rent for the facility.

"I started the dojo so I could train. What's nice is that other people want to come and train with me," Phil chuckles. "People call me Sensei as a matter of formality, but really I m just learning with them."

A unique aspect of the school is all the students are beginners. "We're able to give the students individual training, Renae explains. When I first started in a school, there were yudansha all the way down to the very beginner. I just had to watch and do. I didn't get the benefit of everybody being at the same level." Being able to learn together helps students learn quickly, Renae says.

Through attrition about 15 students regularly practice with the Greenwoods. That attrition doesn't bother them, though. "I don't want a lot of students," says Phil. "I would rather have 10 students who are committed then 100 who are not committed. The students I have are very regular and very committed. I have one student who has not missed a single class since we began the school in October."

That student is John Johnson, a civil planner from Lake Elsinore. "I really enjoy Aikido. The workouts are hard sometimes and definitely a challenge, but once I ve decided to do something, I do it," John explains.

As with many of the martial arts, students come from all walks of life. An anthropologist, a chiropractor, a health-food store owner, a massage therapist and an investment expert are among those who practice with the Greenwoods.

Phil's involvement with martial arts began when he was a teenager. He studied tae kwon do for two years and then discovered Aikido. "I was intrigued by it. It hurt my knees to sit seiza, but I liked training. It was interesting, it was beautiful to see."

He studied at the Pasadena Aiki Kai and San Gabriel Aiki Kai for 15 years. "Pasadena Aiki Kai was a very popular dojo at the time," says Phil. "A lot of people came from all around because we had tatami mats. The real stuff — hard! You learned to take your rolls really well."

His two teachers there were Gene Anderson and Francis Takahashi. It is through Takahashi that Phil's school has a direct connection to Morihei Ueshiba's founding school in Japan. "In O-Sensei's declining years, Francis Takahashi's wife actually took care of him. They were very close. So our relationship with Japan and the Ueshiba family is a personal relationship. If somebody takes the black belt test under me, they will get their certificate directly from Japan with the Ueshiba family name on it."

Visiting Aikidoists are welcome to practice at the Greenwood's school. Open practice times are Sunday, 8:30 to 10 a.m., and Wednesday, 7 to 8:30 p.m., at the *Tumble Jungle gym (behind Dunn Edward's Paint), 41680 Enterprise Circle North, Temecula, Calif. ▢

* Please note that the dojo is no longer at this location. 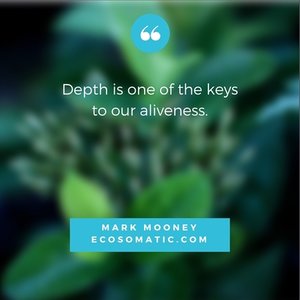 Several of my clients practice Aikido, including Mark Mooney, who is a master somatic coach. He holds the rank of 2nd dan (nidan) and uses principles from this beautiful discipline in his work.

Mark and I worked together to create his Web site. I guided content development and provided copyediting. Popping with personality and color, his site is one of my favorites.

Check it out here.